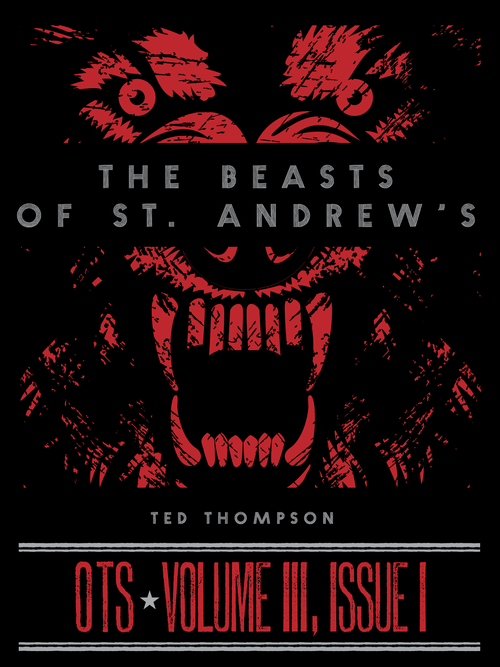 To be totally honest, I wasn’t drawn to werewolves at all. In fact, when I was teaching creative writing in the years just after Twilight, I had gotten so sick of reading werewolf and vampire stories that I was tempted to ban them (of course I never actually did). But then about four years ago I had a falling-out with one of my closest friends, which was a traumatic and confusing experience, and as with all things that trouble me deeply enough, I found myself needing to write about it. And it turned out the only way I could find to articulate the emotional experience was by literalizing Bruce’s alienation—by creating a situation in which one character was a totally different species from the other, and in that, no matter how hard either of them tried, they would never be able to coexist. Ultimately, I see “Beasts” as a story of friends growing apart, of understanding that no matter how much they may care for each other, they have differences that are too great to bridge. Turned out that writing about a werewolf was my way in.

Did you ever consider writing the story from Bruce-the-werewolf’s point of view? Or was the intention always to show Bruce from the perspective of someone outside the transformation process?

I didn’t. I was always interested in the character who was straddling two worlds, who was able to enter regular social life with his peers but also felt a keen loyalty and responsibility for his friend. What are the limits of that loyalty? At what point can you no longer stand by someone? For poor Bruce, so much of the situation is out of his control—he’s an outcast and a werewolf. He can’t help it! But for the narrator things are a lot more complicated.

“The Beasts of St. Andrew’s” is as funny as it is creepy—and in a very organic, unforced way. How important is it for you to incorporate humor into your writing? Or does it just happen naturally because humor is in your toolbox?

I always love stories that make me laugh. It’s the one thing that disarms me as a reader and makes me feel immediately close to the text. So I suppose I try to replicate that experience in my own stories. But more than that, it’s really an issue of tone. It seems to me that it’s always much easier to write moments of earnest sentiment (loneliness or longing or fear) if the moment before it is funny. Or light. Or doesn’t take itself too seriously. It’s in the contrast that feeling can best be conveyed.

Can you name a couple of books, films, or TV shows that deal with a supernatural element you really like? There are plenty out there to choose from, as we all know. Twilight? Percy Jackson? Harold and the Purple Crayon?

Good question. A story I deeply love and have been trying for years to imitate with very limited success is “The Ceiling” by Kevin Brockmeier. It’s about a town where there is a glossy black ceiling descending, day by day, week by week, onto it at the same time as the main character’s marriage is falling apart. That story combines this mythic, supernatural element with precise psychological realism so seamlessly that you can’t say whether it’s one kind of story or another. It’s sort of simultaneously a metaphor and not, a sci-fi horror story and not. It’s a masterpiece. A recent movie that I thought did this beautifully was called Ruby Sparks. It’s a retelling of the Pygmalion myth, about a blocked writer who invents his dream girl on the page only to have her actually come to life. It sounds hokey when it’s described like that, but it’s really funny, and it walks the line between psychological reality and total wacko fantasy quite beautifully. I really hope more people see it.

What are you working on now?

I’m working on two new novels at the moment, which is something I’ve never attempted before. But they’re very different. One is very autobiographical and the other one is very much not. I’m a little superstitious about talking about things before they’re finished, so that’s as much as I’ll say—except that one story opens with a body. I’ll leave you to guess which one that might be.

What is the best bit of advice about writing you have ever received?

Hm. That’s tough because I’ve received so much terrific advice that has suited me at different times. But perhaps the most useful in the long run has been the notion that you have to spend a lot of time sweeping the temple steps before the god appears. Meaning that it takes a lot of work for inspiration to strike—and it tends to strike mostly when you’re doing it. More and more I’ve become convinced that writing is a process of consistency and routine, a training of the mind and a habit of articulation rather than anything all that romantic. That’s where its power lies.

But since that’s a pretty vague answer, here’s something small and concrete that has recently changed my writing life: The next time you’re stuck and you’re tempted to stand up—to go get some coffee or to clip your fingernails or any of the fidgets that crop up when you’re working—stop and set a timer for twenty minutes. For that twenty minutes you can’t check your email or go online or get out of your seat. Your only options are to write or not write until the alarm goes off. My experience has been that I’ve written just about everything that’s worth keeping in that twenty minutes. And often I keep going long after the alarm has rung. For me, fidgets and flinches are often a sign that I’m getting to the edge of what I know, and it’s time to trust my subconscious and my imagination. It means I’ve found my way to the good stuff.

So there you go: my deepest trade secret.