Based on Kass Morgan book and developed for television by Jason Rothenberg, The 100 is a post-apocaliptic drama set 97 years after a nuclear war has destroyed civilization. It stars Eliza Taylor, Bob Morley & Thomas McDonell.

Premise: When a massive spaceship (the Ark) housing humanity’s lone survivors life support systems are found to be critically failing. The leaders send 100 juvenile delinquents back to Earth in hopes of possibly re-populating the planet.

Last season: The 100 teen delinquents got to the ground, they had to learn to work and live together, suffering a few casualties along the way. The ground (Earth) is indeed survivable and the 100 soon find out that they’re not the only remnants of humanity. Confronted to the dangers of this rugged new world, they struggle to form a tentative community.
Up on the Ark, resources are scarce as ever and a battle for power is raging counsel members. After the Ark’s life support systems almost shut down their inhabitants crash-landed on earth, while the remaining of the 100 are abducted by a new possible threat, the Mountain Men.

Review: This show had one if the most interesting premise last year but god this things is seriously starting to go awry. The Ark, the 100, and the different tribes of Grounders – I mean the grubby savage-looking ones – were great for the show but with what’s happening to Clark and the 48 is starting to feel like it’s overcrowded.

We have the 100 (the ex-cons), the people from the arc (basically the parents), the grounders (which have a lot of different tribes) and they’re all the fit of fitest, since they are immune to radiation. They’ve also hinted and introduced another type of grounder – I’m not talking about the ones in Mountain Men – the deformed ones (Reapers). The ones, I’m guessing – because they won’t be just the one guy this season – are physically afflicted by the radiation but can survive on the outside.

So why introduce the Mountain Men only to make them another group of baddies? Since we know they want something from the 100 and I can already guess what it is. This is not adding complexity to the show, it’s overkill, it makes Clarke annoying, and discredits the grounders. It’s a useless storyline, they better turn this around. 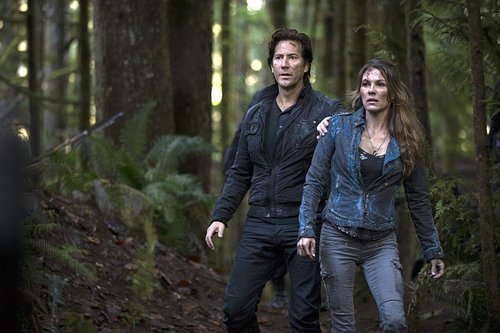 There are so many great aspects to the show that could make it more epic than it is but when they mess up, they really do, I feel like the show is not being handled properly. I am so annoyed that I feel like I haven’t clearly explained my point but what the hell, we’ll see at the end of the season how it all turned out.