Premise: Private investigator Matthew Scudder is hired by a drug kingpin to find out who kidnapped and murdered his wife.

Review: The film is dark, you dive right into the action and even though you know that the opening scene happened 20 years ago you can’t help but think “That’s wrong!” Then the opening credit scene comes along and you settle yourself because it looks much nicer but it’s not. All of that to say to set the tone of the movie.

Some idiot told me it was a revenge movie so I walked in expecting to see Taken. It is a little bit about revenge but they made an effort to create a shroud of mystery around the crime. It made the investigation even more interesting and added to the film noir aspect of the movie. 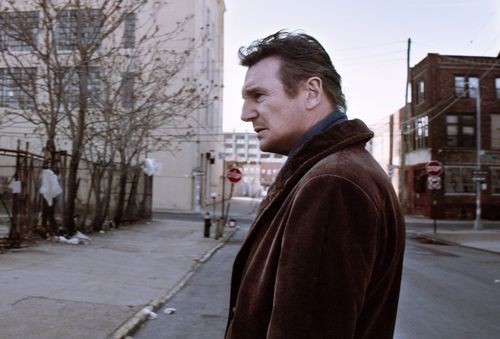 There were smart little details in the films, some pointed out to us others more subtle. Like the way he showed his cop badge, for example, always partly covering it. It makes you feel like you know he knows he shouldn’t be using it. It was nice that the way characters bonded, there was an underlying understanding that didn’t need to be explain, it was just there.

The performances in this film were really interesting. By the way I love the fact that two UK citizens are playing Americans (Neeson & Stevens). The actors are good. In fact, Dan Stevens completely sold his grieving husband role, being all dark and broody. I’m not that familiar with him – I don’t watch Downtown Abbey – but I had a hard time recognizing him. In fact, it was only during the open credit scene that I saw his name and registered later who he was in the film. David Harbour looked the part, he was creepy and dangerous. I also spotted Astro the actor from Red Bend Society.

The ending might not have been to my liking but it worked. I enjoyed the film, partly because it was not a stereotypical revenge movie but more of film noir and also because there’s a tone, a rhythm and heterogeneous characters that make sense.

What did you think about the movie? Speak you mind in the comment section bellow.

One thought on “A Walk Among The Tombstones | Review”